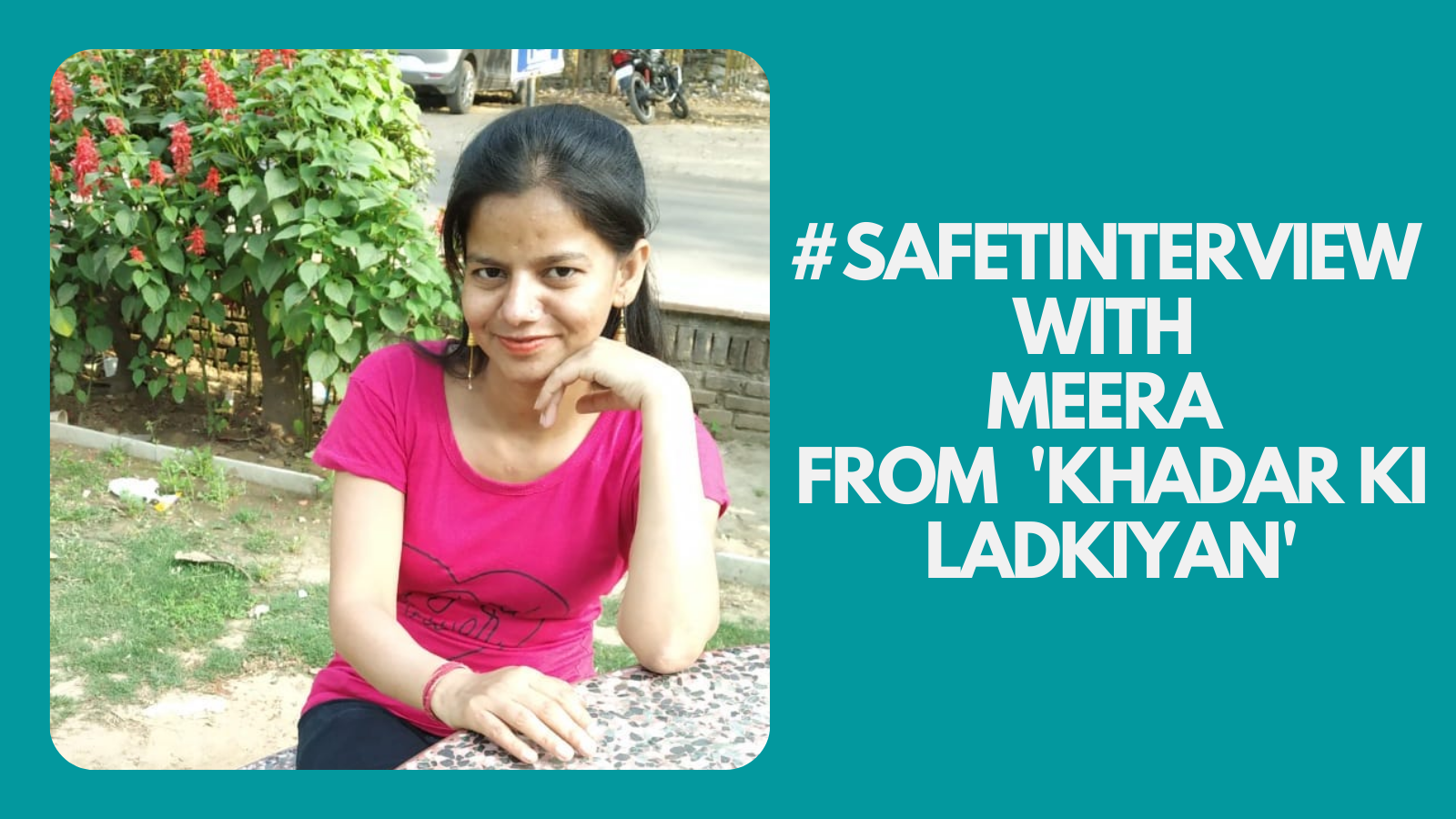 Posted at 06:07h in Uncategorized by admin 0 Comments
0 Likes

I got the chance to talk to Meera, from Madanpur Khadar, who featured in the rap song “Khadar Ki Ladkiyan”, which is a song that the girls of that community wrote and sung explaining their troubles and asserting their right to the city. This song was produced as a part of the Aana Jaana (coming and going) project. Meera is now working with Jagori and asserting her right to the city every day!

Keep scrolling to know more about Meera, the obstacles she has faced and how she overcame them.

Q. Tell me about where you live and your experience living there.

I moved to Madanpur Khadar in 2000 because we got relocated by the government. When I first moved there, it was a scary place- there were no amenities and no viable transport option (there was a mini bus but it was always crowded and a very unstable mode of transportation so I didn’t use it much), so it restricted a lot of girls, including me. I had to stop my education in 9th grade. I eventually got back to studying many years later, when the infrastructure was improved. It is a much better place to live now but there is still a lot of scope for improvement.

Q. How did you become a part of the Aana Jaana project and how was your experience?

We have all been working with Jagori since 2009. That time we used to attend meetings and go for some events. It was in Jagori only that we were introduced to the Aana Jaana project that was organized by King’s College, London. We were asked if we wanted to be a part of the project, share our experiences of living in Khadar and traveling around the city, and we all agreed. We had to do safety audits of our colony and identify which areas where safe and which dangerous. We did these audits using Safetipin. The project was one year long and so we had time to do a lot of things. We made a Wikipedia page where we wrote about Khadar and our troubles in the community, which was a great learning experience because we had no idea how to do it before this project. We also made a rap song to show our struggles because we felt that music could connect with everyone. We never expected it to be so appreciated and to be in the news and even to be interviewed!

Q. How did your family and community react to the video? Did you feel any change after the video released?

I didn’t face too much problem from my family. There was the issue that we had to manage this project alongside work, so we had to meet up late in the evenings and every Sunday. Life had become very busy at that time but it was our wish to take it up so even though it was tough, we were doing it happily. When our song had initially come out, we got a lot of positive feedback and that was really nice. My friends also told me they really liked the song and I think it made them feel that they could also openly say what they felt. I felt very proud to be able to talk about my community on such a public platform.

In the beginning in Khadar, it was so unsafe that I myself didn’t want to go to the market alone. Now, however, I don’t fear going anywhere by myself and that’s a change for my community to see. They still think that girls should always wear a scarf, never go out, not speak too much and definitely not talk to boys. They used to comment before but now they just give looks and I have gotten used to it so it doesn’t bother me.

Q. Do you have brothers and sisters? How do you think treatment for your brother is different from yours?

I have one sister and 4 brothers. The problem of gender was there in the beginning but now it’s not as much. This is mostly because of Jagori. There has been a change from within me and it has spread to my family and community. My neighbours sometimes still ask about where we are and why we go out so late but they have reduced asking a lot because they are also starting to get used to it.

Q. How was the experience of shooting a video?

It was a little strange, at first because we had never worked in front of a camera before. Nandan bhaiya, who was our videographer would keep pointing out our mistakes. He would keep asking us to emote more and be expressive. On top of this we had to shoot in public so people would always stare. During the making of the video, there was a little agitation but once the video was made we were all very happy and could only remember all the good times we had while shooting.